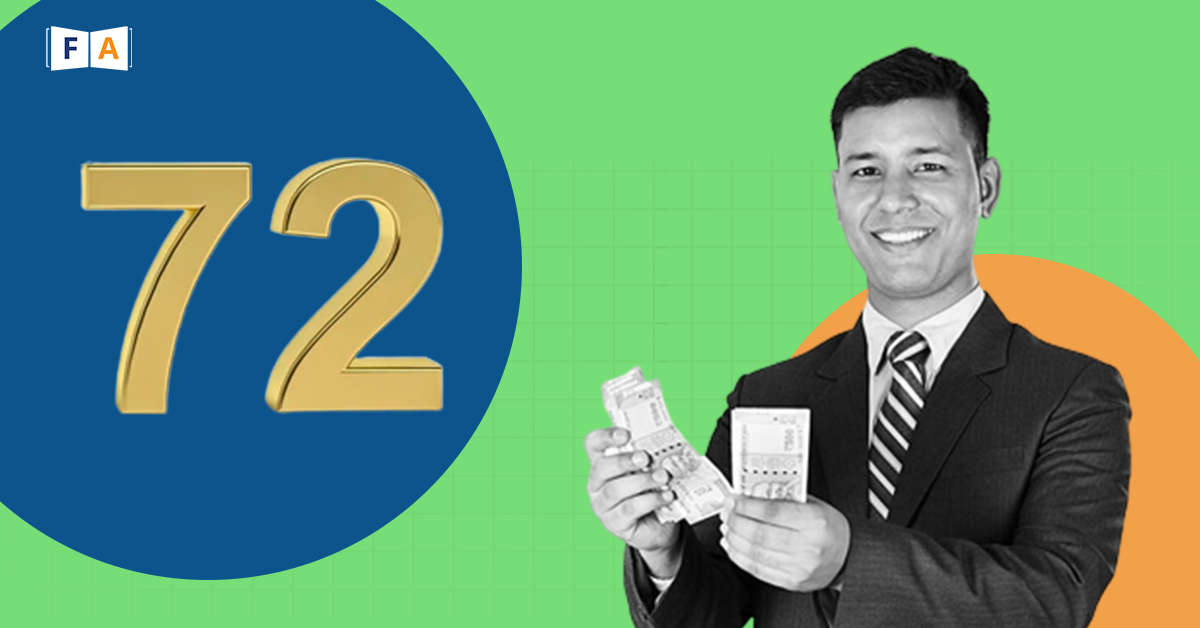 The rule of 72 is a straightforward calculation that determines how quickly your money will double at a given rate of return. To calculate the number of years it will take for your investment to double, divide 72 by your yearly compound interest rate. Let’s have a look at how it works and how you may put it to use.

What is the finance rule of 72 basically?

Calculating compound interest is a difficult mathematical task that most people resort to using a calculator to complete. Determine your set compound annual interest rate to get started. Once you’ve figured it out, you’ll need to divide it into 72 parts (hence the rule of 72).

When it comes to the correctness of this guideline, an annual interest rate of 8% produces the greatest results. However, you may use the rule of 72 for any proportion between 4% and 15% with confidence. Beyond these limits, the rule becomes far too ambiguous to be relied upon. In the end, though, nothing beats calculating genuine compound interest.

You can also use the rule of 72 to find out the reverse. You may divide 72 by the number of years you want to double your money, and the result will give you the yearly interest rate you’ll need to reach your objective. Take a look at the examples below to understand how this may be useful:

Although the rule of 72 is quite simple, there are a few methods to make it more precise by employing simple math. Remember that an interest rate of 8% is the most realistic example of the rule. Adjust “72” by one in the direction of the rate shift for every three points that an interest rate deviates from 8%. So, if the rate is 5%, you would reduce the rule to 71. A rate of 11 percent, on the other hand, would cause a change to 73, while a rate of 14 percent would cause a change to 74.

What if the Rule of 72 was renamed the Rule of 69.3 instead? For one thing, it wouldn’t have the same ring to it. However, for those who take advantage of ongoing compounding, using the later dividend has shown to provide superior estimates. In terms of interest potential, this is unlikely to add anything to an investing account. However, it can make a minor impact.

Daily compounding is increasingly being used by banks. Savings accounts, money market accounts (MMAs), and certificates of deposit all have this tied to them (CDs). Check to see whether your bank offers any of these account kinds, as they are typically used for a lengthy period of time.

Origins of the Investing Rule of 72

Mathematical and economic sciences have piqued people’s interest since the dawn of humanity. Indeed, it appears to stem from the Mesopotamian, Roman, and Greek civilisations. It’s even mentioned in the Quran. Its origins may be traced back to agriculture and the first forms of land and money lending.

However, Luca Pacioli, a well-known Italian mathematician, is the first to cite the rule of 72. His magnificent work, “Summa de arithmetica, geometria, proportioni et proportionalita,” was published in 1494 and contains the first documented mention of the rule, giving him the closest thing we have to its inventor. Some attribute the rule’s creation to Albert Einstein. There is no paperwork to back this up.

This is a fantastic tool for retirement planning as well as long-term financial planning in general. Although you’ll eventually want to utilise a more in-depth projection strategy, the rule of 72 might be a good place to start.

What are SGBs? Should you invest in them?